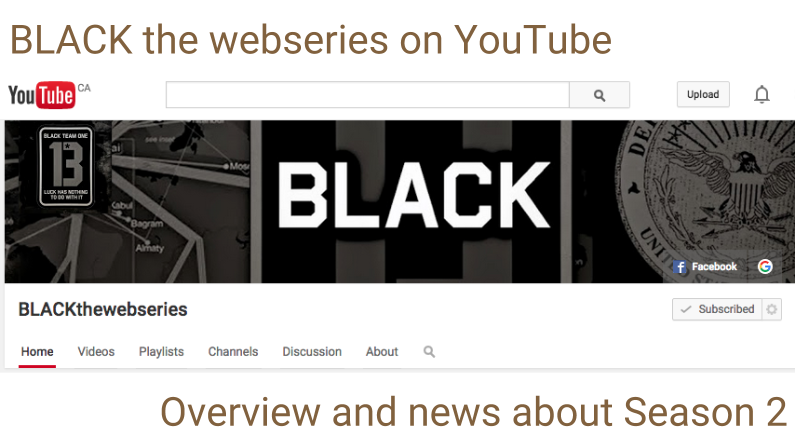 Most webseries are not really all that great, but are often still fun to watch all the same and I like seeing different story ideas than what Hollywood often offers. Then occasionally you find a series that not only feels fresh, but is also really well done, has good quality audio and video, and is genuinely enjoyable to watch; making you want to come back for more episodes and hoping that they make another season soon. Black the webseries definitely fits into that latter category.

A little over a year ago I came across the first season of Black on YouTube. It was only 5 episodes long (and ran less than half an hour all together), but it had a very realistic feel to it and it was really enjoyable. It follows a team of US servicemen as they are pulled together to create a secret black ops group to deal with a series of attacks on the CIA on American soil. After more than a year of waiting, season 2 was released on their YouTube channel over the last week or so and it was well worth the wait. Like the second seasons of most shows, season 2 of Black takes all the great parts of the first season and just expands upon them.

Here’s a quote from their website describing the “feel” the series aims to achieve:

BLACK IS A HIGH ACTION WEB SERIES CRAFTED IN THE STYLE  OF THE FEATURE FILM ACT OF VALOR, THE HIGHLY SUCCESSFUL VIDEO GAME FRANCHISE CALL OF DUTY MODERN WARFARE AND THE
HIT FOX TELEVISION SERIES 24.

Many of the actors involved in the series are not professional actors. In fact, a good proportion of them are actually current or former US military and law enforcement. So while the acting doesn’t feel as polished as the best Hollywood movies, it is still better than you would think and honestly better than many professional movies I have seen. One of the great benefits to them using the actors that they do is the way those actors look and act, which seems very natural and real; which makes sense as they have their own real world experiences to draw upon. I think this really adds to the “realistic” feel of the series.

They raised money for season 1 on Kickstarter. Aiming to raise $7500 for the project, they exceeded their goal and actually raised $10,555. Kickstarter was also used for season 2; this time aiming for $50,000 and receiving $57,244 and doubling the number of backers from season 1. Also, with the success of season 1, they had some good corporate sponsorship for season 2. Perhaps their most notable sponsor being 5.11 Tactical. With that kind of money, they were able to make a much longer and more involved season 2. Thankfully the product placement from the corporate sponsors is not overly noticeable; it really just adds to the realism of the series without distracting from the story. You will see that a character is wearing a 5.11 slingbag, but it looks right; it doesn’t look forced or out of place.

As I mentioned before, season 1 was only 5 episodes long and took less than half an hour. Season 2 however is 6 episodes long, and each of those episode is longer than any episode of season 1. In total season 2 runs over 80 mins (including credits). Oh and speaking of credits, make sure you watch all the way to the end of the closing credits of the last episode of season 2 for a bonus scene. Also while season 2 is currently on their YouTube channel, it will be set to private within the next day or so. They are looking at other delivery models for viewers to watch season 2. When I learn how to watch it, I’ll pass that along to you in a new blog post.

To learn more about Black the webseries,

While Season 2 will only be on their YouTube channel for another 24 hours or so, you can still see the teaser for it here:

This site uses Akismet to reduce spam. Learn how your comment data is processed.